For nearly 20 years the ulfBo has been the number one folding cart. Developed for marketability by its inventor Norbert Haemmerling. He led the market as a "first mover" in the early years. Over the years other manufacturers have come up with the idea of ​​replacing bulky and heavy wooden carts with a lighter version. Many with moderate success. Some have quickly disappeared from the market after a short appearance simply because the level of complaints was too high due to poor quality or the models were simply designed to bypass the needs of customers. For example the "Kranich" (Monz company), the Puky Ceety H25 and the Haba "Expedition Trolley" were taken off the market. The ulfBo, however, continues to enjoy high popularity. Everything is just right from the start with this concept.

Many so-called "foldable" carts from the low-cost segment have in common that they are manufactured in low-wage countries such as China. Even if some "manufacturers" want to give the impression that these are German products: this is not the case and accordingly the processing quality and durability of these models are low. This has a direct impact on the utility and on the resale price if these trolleys are even resold as second-hand goods. Because most low-priced products break down after only a short period of use and can no longer be sold due to the lack of repair options: they then end up in bulky waste.

More and more used ulfBo wagons are offered on ebay after several years of use because the kids have grown up in the meantime. We are very happy about that because it shows how robust and durable ulfBo wagons are. Even after many years high resale prices are achieved. This means that you have spent only a small amount of money for your own usage of the wagon which may even be lower than if you had put the money in a cheaper model whose lifetime is very limited. The environmentally friendly effect of a longlasting product life is also to be emphasized.

You won't get a 2-year warranty for a cheap product as you get for the ulfBo. That says a lot about the products. Take care.

In any case, many of these low-cost models can only be used to a very limited extent. Much of them are made from steel and much too heavy. The unfolding and folding is often very tortuos or dangerous because of pinching. Other models have very small wheels without any comfort or are not suitable for the beach. The steering is often miserable - the steering wheels flutter while pulling. Some offered covers are useless because they are neither rainproof nor able to really protect from the sun.

The highest customer satisfaction is always our goal. It is very pleasing that we are constantly receiving very positive feedback in text and picturesand on the phone. This confirms again and again that we are on the right track with the ulfBo. 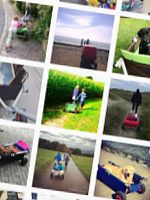 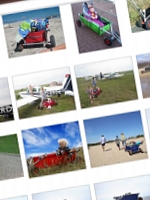